Among the many social and lifestyle changes that we have been experiencing since the current public health situation began, one of them is a new relationship with nature. Measures of social distancing and reduced capacity underway, the concept of city is evolving. An inner call towards the rural world is present and a new feeling of ecology and the return to the local are growing. For many artists we are living a moment of introspection, of creation. A similar trend emerged in the 1960s and 1970s of the 20th century when a new art movement surfaced, the Land Art, or environmental art.

Concerns of the Land Art centered around rejection of the commercialization of art-making and enthusiasm with an emergent ecological movement. The art movement coincided with the popularity of the rejection of urban living and an enthusiasm for that which is rural. Exponents of land art rejected the museum or gallery as the setting of artistic activity and developed monumental landscape projects which were beyond the reach of traditional transportable sculpture and the commercial art market. Land art was inspired by minimal art and conceptual art but also by modern movements such as De Stijl and cubism.  As a trend, it expanded boundaries in techniques by using materials as soil, rocks, vegetation and water found on-site. The siting of the works was usually distant from population centers.

It is an art that connects us with the earth, ephemeral, changing and that is related to prehistoric art and the manifestations of anthropological and ethnographic art. It is a different way of understanding nature and the science of geometry.

Isamu Noguchi‘s (1904-1988) design for “Contoured Playground”(1941) in New York is sometimes interpreted as an important early piece of land art. Largely associated with Great Britain and the United States, Land Art includes examples from many countries.

The best known artist who worked in this genre was the American Robert Smithson (1938-1973) whose 1968 essay «The Sedimentation of the Mind: Earth Projects» provided a critical framework for the movement. His best known piece, and probably the most famous piece of all land art, is the “Spiral Jetty” (1970), for which Smithson arranged rock, earth and algae so as to form a 1,500 feet long and 15 feet wide spiral-shape jetty protruding into Great Salt Lake in northern Utah (USA). In 2017, it was officially recognized as the state work of land art. Smithson used over six thousand tons of black basalt rocks and earth from the site.  How much of the work, if any, is visible is dependent on the fluctuating water levels. Since its creation, the work has been completely covered, and then uncovered again, by water. 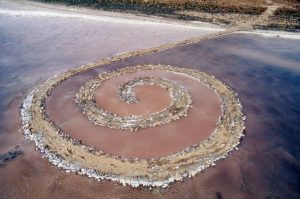 Sir Richard Long (1945) is an English sculptor and one of the best-known British land artists. He won the Turner Prize in 1989. Long’s work has broadened the idea of sculpture to be a part of performance art and conceptual art. His work typically is made of earth, rock, mud, stone and other nature-based materials. In exhibitions, his work is typically displayed with the materials or though documentary photographs of his performances and experiences.

Andy Goldsworthy (1956) is a British sculptor, photographer and environmentalist, based in Scotland, who performs site-specific art and Land Art in natural and urban sites. The materials he uses for his sculptures are: flowers, icicles, leaves, mud, pinecones, snow, stones, branches and thorns. Goldsworthy reinvents the world through natural geometry. Circles or spirals are designed with materials such as stones, wood or flowers: shapes and places where the essence of this artist emerges. 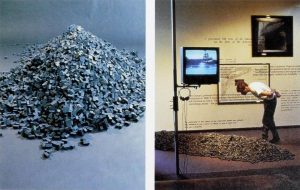 Betty Beaumont (1946) is a Canadian-American site-specific and conceptual installation artist, sculptor, and photographer. Beaumont’s diverse body of work challenges global social awareness, as well as socioeconomic and ecological practices. Beaumont is involved with investigating solution-based sustainability strategies that reflect contemporary, historic, and cultural perspectives and environmental and social conditions. One of Beaumont’s most notable works is the environmental installation “Ocean Landmark” (1978-1980), a grand-scale underwater project. The installation consists of 17,000 neutralized coal fly-ash blocks strategically submerged three miles off Fire Island National Seashore to lay on the floor of the Atlantic Ocean, creating an artificial habitat for marine life.

David Nash (1945) is known for works in wood and shaping living trees. His large wood sculptures are sometimes carved or partially burned to produce blackening. The best known is “Wooden Boulder”, begun in 1978. This work involves the journey of a large wooden sphere, carved by Nash in the North Wales landscape and left there to weather, from a Welsh mountainside (UK) to the Atlantic Ocean. Over the years, the boulder has slipped, rolled and sometime been pushed through the landscape following the course of streams and rivers. The sculptor had no idea of its current location, and enjoys the notion that wood which grew out of the land will finally return to it. The boulder was last seen in 2015.

Jim Denevan (1961) works with natural materials to create massive scale drawings in sand, ice, and soil. His sculptures are not placed in the landscape, rather, the landscape is the means of their creation. His process goes beyond drawing and implies a spiritual land-finding process. His creations usually last a few hours before being washed away by the tides. Aerial photography or video is needed to comprehend the final work.

If you liked this article, you can invite the author to a coffee, tea or whatever you feel like it and it only takes a minute. Thanks to your contribution we will be able to continue offering the latest news about contemporary art in connection with science and technology.