teamLab, a Tokyo based 500 + team of artists, programmers and animators has skyrocketed the Amos Rex ART museum to international fame with its all-digital exhibition Massless. Daily long queues in central Helsinki outside an art museum has been a familiar sight all past autumn. In less than four months tens of thousands visitors per week have pais a visit to the new subterranian art museum Amos Rex after it opened, following a five-year unique construction project.The inaugural exhibition by teamLab, a collective composed of hundreds of creatives in Tokyo, sparked an enormous interest and turned out to be an almost too good to be true kickstarter. Since 2001 teamLab has brought together professionals from various fields of practice in the digital society, artists, programmers, engineers, animators, mathematicians, architects, web and print graphic designers and editors. The artist team refer to itself as ultratechnologist,  aiming to reach beyond the boundaries between art, science and technology.

The Amos Rex exhibition Massless, as explained by the artists, encompasses expression freed from physical constraint, making our experience massless, as the digital has liberated human expression from the physical and no longer requires a bond to the material in order to exist.

In the first gallery space we are met by a giant digital wave with a calming sound immersing the visitor into the art work. The imagery of the wave goes back to ancient Japanese painting to a time when people sensed life in water, in oceans and rivers. The sight and sound of the wave connect  their world to ours, creating a space of deep contemplation. 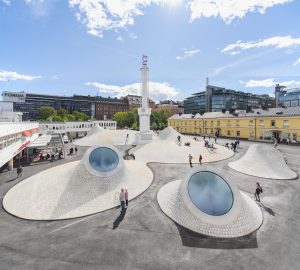 Amos Rex, in the very heart of Helsinki, the capital of Finland, is suddenly on the list of the ten most interesting new art museums in the world, after its inauguration in August 2018.
Photo credit: Mika Huisman

”Lost, immersed and reborn” exemplifies this relationstips by an interactive digitally created ecosystem of animals and plants that can be changed by the visitors actions and steps.

The largest installation created especially for Amos Rex, “Vortex of Light Particles” is a digital simulation of water pouring towards the ceiling in reversed gravity to the above skylight. The simulation recreates waterfalls and vortices along the ceiling and the walls of the space. The water is represented by a continuum of numerous water particles, and the interaction between the particles is calculated. Lines are drawn in relation to the behavior of the water particles.

TeamLab exhibitions are now touring in Singapore and the US.

The skylights of the underground gallery space reveals the museum venue at the renowned Lasipalatsi square by a series of domes forming a thrilling outdoor landscape. Not long ago did the inhabitants and artistic society in Helsinki argue fiercely about whether to invest in a branch of the Guggenheim art museum at the other end of the city or not. After the surfacing of Amos Rex all the petty talk is forgotten.

What is it a vortex?

A vortex is a mass of fluid (such as a liquid) with a whirling or circular motion that tends to form a cavity or vacuum in the center of the circle and to draw toward this cavity or vacuum bodies subject to its action.

In the dynamics of fluid, a vortex is fluid that revolves around the axis line. This fluid might be curved or straight. Vortices form from stirred liquids they might be observed in smoke rings, whirlpools, in the wake of a boat or the winds around a tornado or dust devil.

Vortices are an important part of turbulent flow. Vortices can otherwise be known as a circular motion of a liquid. In the cases of the absence of forces, the liquid settles. This makes the water stay still instead of moving. When they are created, vortices can move, stretch, twist and interact in complicated ways. When a vortex is moving, sometimes, it can affect an angular position.

Examples of vortices are the underwater vortex rings whose core traps a ring of bubbles, or a single donut-shaped bubble. They are sometimes created by dolphins and whales. The lifting force of aircraft wings, propeller blades, sails, and other airfoils can be explained by the creation of a vortex superimposed on the flow of air past the wing.

Vortices in the Earth’s atmosphere are important phenomena for meteorology. They include mesocyclones on the scale of a few miles, tornados, waterspouts, and hurricanes. These vortices are often driven by temperature and humidity variations with altitude. The sense of rotation of hurricanes is influenced by the Earth’s rotation. Another example is the Polar vortex, a persistent, large-scale cyclone centered near the Earth’s poles, in the middle and upper troposphere and the stratosphere. 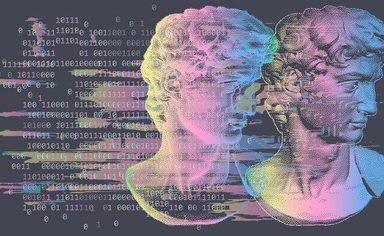 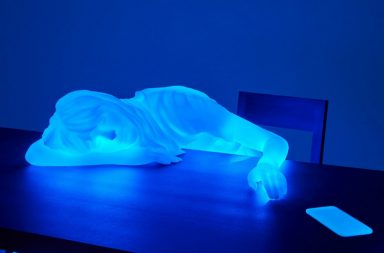