Birk Schmithüsen (Aachen, 1986) is a young international artist who is inspired by the use of technology to create spectacular audiovisual installations in which he uses artificial intelligence. He studied at the Leipzig Academy of Fine Arts and has carried out projects and exhibitions in Germany, Poland, Spain, Brussels and Austria. He currently lives in Gijón (Spain) thanks to the EMAP / EMARE (European Media Art Platform / European Media Artists in Residence Exchange) scholarship for artists interested in using technological and digital media for their creations.

How did your interest in Artificial Intelligence (AI) applied to art begin?

I was always interested in using electronic tools in a different way than they were intended. When I was young, I collected old car instruments, to make my own blinking disco lights. Now I’m interested in algorithms and neural networks, but it is still the same motivation: to open electronic or software blackboxes for investigation and aesthetic reuse. Art is a great way to question emerging technologies in unusual ways.

Machine Learning and AI are a pretty new tool and artistic media, although the concept is already known since the Eighties. Since about 20 years sufficient hardware to use machine learning in practice is available and just since a couple of years the programming tools are easy enough to handle to enable individuals to program creative applications. I like to explore this field without having much of a reference in history. It is always exciting to be among the first to investigate new tools.

Another reason to work with AI is that this technology is changing our world and our day to day behavior very fast and a lot of development is pushed by global corporations. I think it is important that as much people as possible from different disciplines formulate their own point of view on the topic. Hopefully art can ask questions that lead to a humanistic usage of AI.

Did you start your learning on technological and digital art at the Leipzig Academy of Fine Arts?

Although I studied art at university, I am mostly self-taught. I got my first computer and started programming when I was about 12 years old. Since then I was fascinated by new technologies and the possibility to learn from the open source community how to use and hack them. The Academy gave me a proper background in art history and helped me in finding my own artistic language.

Has the experience at LABoral Center for Art and Industrial Creation influenced you when working with art and science?

From the institutes of choice within the EMAP / EMARE framework, LABoral seemed to fit best my artistic practice. I am working with emerging technologies and create audiovisual artworks. LABoral is specialized in both and has good facilitation for production in this field. I also like Spain and the sea and as a side effect I could improve my Spanish a little bit.

LABoral introduced me to the Machine Learning Group of the University of Oviedo to support my work with knowledge from experts. That was inspiring and helpful and for me it was the first time I have worked with scientists, who have never worked in the field of arts before. I hope that in the future I will have further constructive collaborations like these.

One of your first installations dedicated to artificial intelligence is titled “Klang · Netz” (2017). The intersections of LED lights are capable of creating a melody when receiving impulses. Are the people passing under the installation the ones inducing these impulses?

“Klang · Netz” is not an interactive installation. The impulses are generated by a pre-arranged composition that plays back in a loop. But I also built an interactive version of the work that is called “Impulse”. This installation consists of metal tubes hanging from the sealing, connected with the network from LED stripe. When the audience bangs a tube, a new impulse is generated. 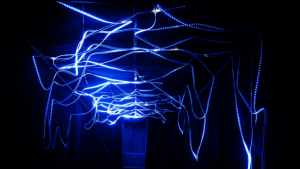 In relation to “Klang · Netz” (2017), do you think that the artificial intelligence that can create music by joining sounds of musical instruments is a new possibility for musicians?

With “Klang · Netz” I created a new technic of how to make a composition. The sequence and duration of tones is determined by the nets structure. Each time the installation is hung in another exhibition, its composition changes. But the sound design of the notes comes from a static sampler. The joining of sounds with tools like Nsynth gives musicians a new way to create sounds. We have to distinguish between sound, composition and music. 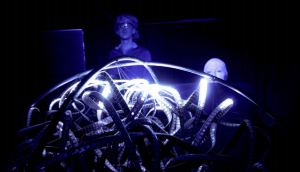 In “Speculative Artificial Intelligence / Exp. # 1 (audiovisual association)” (2018), the sounds emitted by the machine are transformed into visual signals. The luminous pattern of the tangle of LED lights illuminates in one way or another depending on the sounds received. Are the light waves connected with the direction of sounds?

In the first experiment each LED is connected to one neuron of the neural network. Each LED represents the neuron’s state by its brightness. By training the network with pre-composed association between sounds and visual shapes, the network learns which sounds should create which shapes. The networks reaction to unknown sounds is the predictable unpredictability.

How did you develop the idea of “Speculative Artificial Intelligence / Exp. # 2 (conversation)” (2019) where two machines interact with each other?

I am generally interested in systems that create their own behavior within a framework that I can shape. With two autonomous machines in communication, the resulting system is very dynamic and creates unpredictable results. One challenge was to design both autonomous machines in such a way, that the system does not get totally random on the one hand but also not stuck in a permanent state on the other hand. To create this behavior, I had to teach the systems the basic principles of a constructive conversation. Empathy by understanding the messages from others. Purpose by developing the conversation in a certain direction.

The machine is trained to generate precomposed light patterns according to the interpretation of the received sounds. The lights enlighten in response to the learned association, but create new light patterns to unknown sound. That Is what is called the generalization of a learned concept. 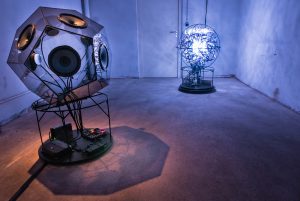 To what extent have Felix Bonowski and Marcus Ding helped you to perform Speculative Artificial Intelligence?

Felix Bonowski developed the calibration system for the light object. The 14.000 LEDs within the object are mapped in three-dimensional space, enabling the object to display three dimensional forms and shapes. To create this volumetric display from a chaotic heap of LEDs, the position of each LED has to be known. With Felix’ calibration system chaotic structures can be analyzed with a webcam.
Marcus Ding wrote the code for the sound object. I knew what was needed and he knew the best way to implement it. It was a nice teamwork.

How useful are the cameras’ vision capability in “Speculative Artificial Intelligence / Exp. # 2 (conversation)” (2019)?

The camera gives a good picture of the light object and the feature detection of the CNN (convolutional neural network) in the sound object is working very precise in detecting the visual words sent by the light object.

Do you think your art can also help to understand the biological neuronal process?

The biological processes in our brain are different from the way artificial neural networks work. My art is not a visualization or representation of the way our brain works. But the overall principle of many small units that are interconnected and together make up an intelligent system can be experienced in my work as well as in social networks, groups of people or our brain, although the concrete processes differ a lot.

I think there are two main strategies how to use AI in artistic practice, either as a tool to create endless variations from an existing style, or as artistic media itself. The mode of operation as well as the result between both ways differs a lot. When AI is used as a production tool to create new works from an existing style, the artist´s task resembles the work of a curator by selecting the outcomes he or she likes. When AI is used as artistic media, the artist must create his or her own concepts and aesthetics.

Do you consider the possibility that art made with technology can displace plastic arts in the future?

I do not think that AI art can ever displace conceptual art because there is no strong AI (and hopefully there will never be) that has its own intuition, aims and feelings. With Fine Arts it is different, because the art market has shifted the focus from concepts to pure visual appearance. AI can create paintings and objects much faster and thus more diversified than humans and though I can imagine that at least in the art market world Fine arts created by AI might displace human objects. Let’s hope that this development shifts the evaluation of a work from purely visual perception to the evaluation of the intention with which it was created. Artists can talk about their intentions, AI cannot.

Edition and translation by Sara García-Rodríguez, editor-in-chief of Probeta Mag.

Interview by Andrea García-Casal, collaborator of Probeta Mag (degree in Art History and researcher of art history and science in national and international publications and congresses)

If you liked this article, you can invite the author to a coffee, tea or whatever you feel like it 🙂. For as little as €1, you can support us and it only takes a minute. Thanks to your contribution, we will be able to continue offering the latest news about contemporary art in connection with science and technology. 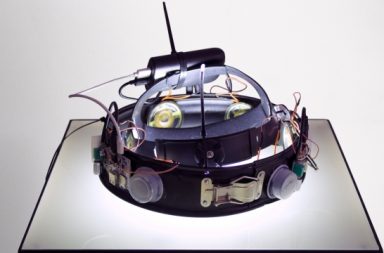 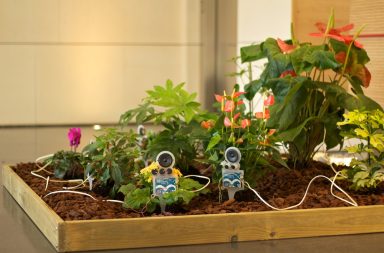